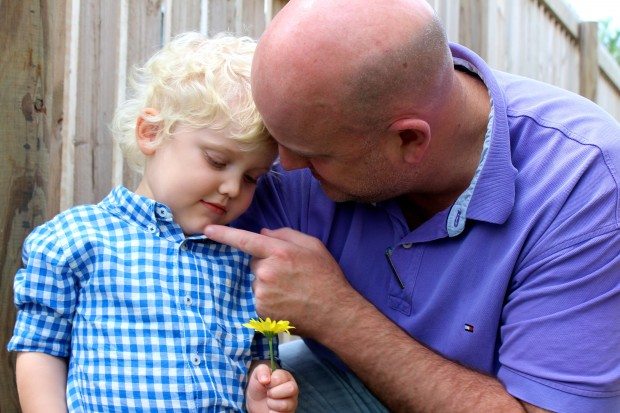 Raising boys to be confident to show and express their feelings is an approach society generally does not yet support. Our boys are naturally caring, sensitive people – not only deserving of love coming to them, but also deserving of feeling the gentleness of giving love – and not having to hold back out of a fear of feeling judged as lesser because of it.

Is it possible that from an early age, boys are encouraged to shut off from connecting with their tender and gentle side and to instead, behave competitively and to become hard? As children, boys soon learn that liking girls, flowers, butterflies and pink is ‘sissy’ and not for them.

How is it that love and the expression of love are no longer the natural and normal way for so many boys and men?

My son, who is nearly 6, is popular with some girls at school because he is very natural and, although not perfect, he isn’t afraid to show his gentle, caring, sensitive side. I noticed that a girl in his class went out of her way to say hello to him and he turned to her in acknowledgement and beamed at her. This was also noticed by another boy from an older class, who would have been about 8 years old. What was interesting was that he then turned to the girl and said something along the lines of, “Are you visiting your boyfriend?” in a very derogatory way, referring to my son. This made the girl hesitate to approach my son again and you could visibly see her confusion because she knew she had been made to feel less in some way for having shown her joy at seeing him.

It was only later that I realised that this boy really liked this girl and was jealous that she had shared such a natural and joyful exchange with my son. He also wanted to be natural around this girl, but because he was standing with two of his friends, he didn’t want to reveal it and was putting on a front. It was important to him to get her to notice him in any way at all – even belittling her was a win for him as it certainly got her attention. For him, this was better than showing his true feelings and allowing her to like him naturally, which was not even on his radar.

Witnessing this, I could see how we master at such a young age to hide our naturalness for fear of rejection and ridicule… and how boys get rejected at so young an age that by the time they get to 8 years old they are already displaying pack behaviour and choosing to over-ride their true expression and feelings.

This event reminded me of how many teenage boys behave around girls and how boys will do anything to not show their vulnerability. They put up a front for the purpose of hiding who they are from their mates, for fear of being ridiculed or of being rejected by them, for having and showing these more refined feelings.

Wouldn’t we then be confirming that they are great because there would be no judgement on their true expression? Instead of making them feel less and wrong by saying, “Boys don’t do that!,” we would be encouraging and honouring them for being who they are first and allowing them to be honest and natural in expressing whatever is going on for them.

The natural, caring expression of men is truly tender and loving and yet each generation, in order to cope with their hurts and sense of rejection, tries to toughen up the next by telling their boys that feelings are not only not important but they are a bad thing to have… that getting in touch with their ‘feminine side’ is weak and undesirable and they must get rid of it.

How many women desperately want men to be more sensitive and open and – if men were honest – how many men want to be open and express their sensitivity too?

Their hurts stay with them and, as they grow, boys and then men, cope with their sense of rejection of not being allowed to just be themselves by sticking with behaviours that seemed to protect them in the past… for example, by:

and, even more insidious:

In short, most men go through life not expressing themselves naturally, even though the natural and true expression of men is tenderness, care and love.

Imagine two straight men expressing their love publicly for one another in utter tenderness and expressing from the heart without fear or worry that someone will question their sexuality. I have witnessed and been blessed by this many times over from men who are well down the road in dealing with their hurts, who have shown me how possible and how real this is.

Raising boys to be men who are free to be themselves and to express their innate gentleness and care, is essential. It builds love, brings beauty, binds generations and heals hurts. When the true expression of boys and men is unfettered, society indeed is blessed – a blessing humanity so desperately needs.

A heartfelt thank you to Serge Benhayon and Universal Medicine for enabling me to see without judgement past the protective behaviours people have, in understanding why they are there and for supporting me in seeing through mine.

I am a mother of two amazing children and a part-time teacher of English. My idea of a good time is meeting new people, building relationships and in supporting others to know just how unique and amazing they are.