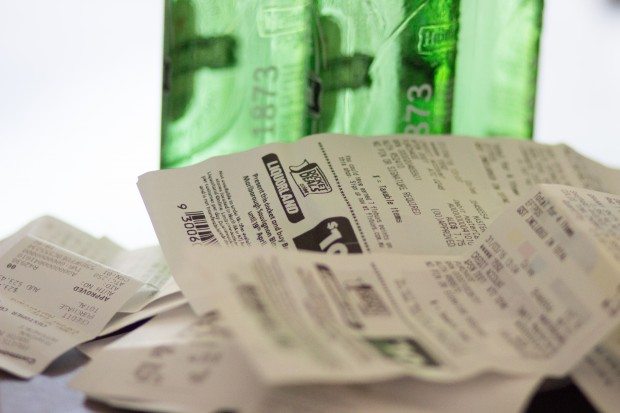 Global Issues, Greed/Corruption, Social Issues 919 Comments on Shopper Dockets & Alcohol Abuse – Is There Such A Thing As Responsible Service Of Alcohol?

Shopper Dockets & Alcohol Abuse – Is There Such A Thing As Responsible Service Of Alcohol?

By Martin Gladman · On April 19, 2016 ·Photography by Leonne Sharkey

Recently I was shopping at Woolworths, a large chain supermarket that, alongside its major counterpart Coles, holds approximately 80% of the grocery shopping market in Australia. After settling our grocery bill and receiving our receipt, my house mate and I noticed that at the bottom of our docket that there was a promotion for discounted alcohol. My flat mate and I both stopped for a moment and thought this was quite a strange thing to promote considering that alcohol kills 15 Australians every single day (1) and is a major contributing factor to 20,000 children experiencing substantiated abuse every year (2), why would a supermarket discount and promote a substance that is a major contributing factor to these things?

According to Shop A Docket, a privately owned advertising agency, advertising on shopping receipts is one of the leading forms of marketing available to businesses in Australia with them reporting that 77% of all shoppers read the back of their dockets for discounts and 73% of them had in the weeks before their study used these dockets to purchase advertised products. That’s approximately seven million Australians every single month reading these dockets and using them to purchase a promoted product.

I did some further research into the impact alcohol has on the Australian people’s health, well-being and safety and came across the following disturbing and confronting statistics:

Now this is only a snapshot, there are many more statistics out there highlighting the significant damage alcohol causes to our society, and this is not even beginning to look at the financial and emotional costs associated with every hospital admission, every police call out or every child protection investigation, all responding to the end result of alcohol being bought and sold in our country.

Now it would be very easy to look at these numbers and simply brush them aside, we are often bombarded with statistics and they can often become dehumanised. So let’s stop for a moment and consider these numbers in relation to real, everyday people.

Every single one of those numbers represent a person who each have family, friends, neighbours, colleagues, so on and so forth, who each have had to witness their loved one being significantly impacted by someone who uses alcohol.

So if we multiply these statistics by ten, we’d have a much more realistic picture of those who are actually affected by alcohol in this country, and when you think about it, that’s quite a lot of people.

But let’s take this a little further. Have you ever spent time playing with a child? Have you noticed how innocent, vulnerable and fragile they are? It’s almost hard to imagine anyone could ever abuse or hurt a child, but they do. Now in an average kindergarten classroom there is approximately 30 children per class, 30 very little human beings just beginning to explore and understand life.

Then once you’ve pictured that, multiple that classroom by 666 and you might start to get a picture of what 20,000 Australian children look like.

All of their abuse linked with alcohol.

When my flat mate and I got home we decided to spread the word via Twitter, initially just to share with our friends and followers but then I thought, why not include Coles, Woolworths and IGA in the conversation, so I tagged them in. Woolworths and IGA remained silent, but Coles responded. I’ve included screenshots of our public conversation below.

There was no further correspondence from Coles after my final Tweets.

The Director General of the NSW Department of Trade and Investment at the time though decided to overrule the Agency’s recommendations on this point, continuing to allow these practices to happen in NSW.

It was later reported that internal documents showed that this decision was made after what appeared to be ‘intimidation’ tactics by Woolworths (8), including legal threats and complaints being made to ministers. Does one smell a hint of corruption? You can read more about this here.

Coles, who were nice enough to respond to my Tweets, stated that they ‘take [their] responsibilities in regard to the promotion of liquor very seriously & always encourage responsible behaviour’.

But how is it responsible to continue carrying out a practice that professionals from our very own investigatory body has researched and stated should stop due to it ‘likely to encourage the misuse and abuse of liquor’?

But who else is responsible here?

It would be very easy to point the finger at the supermarketers and liquor stores, but the real answer here is that we are responsible, the entire population of Australia, for every time that we make a purchase of alcohol, be it with or without a promotional docket, we are supporting the manufacturing and distributing of a substance that endangers and harms millions of Australians.

By the very nature of us contributing our money to this product we are supporting it and saying ‘yes’ to it in full, to everything that that product brings and represents, and so, as we can see by the many harms caused by alcohol, we are saying yes to some very dark and disturbing things.

So next time you’re purchasing your alcohol, be it at a major supermarket or not, take a moment to look around and count the number of children you see, count the number of women and then imagine each and everyone of them being badly beaten and abused that evening, take a moment to imagine what they are seeing and feeling when they look into the dead and blank eyes of their intoxicated abuser or how the stench of the very drink you are buying can be smelt on their breath or sweating from the pores of their skin. Then take a look at your purchase and think for a moment, what exactly is it that I am buying into? And then later, when you’re sitting at home, enjoying your drink, take a moment to toast all the children and women who are being abused in that moment and appreciate the fact that you’ve just contributed to it, by the nature of putting your money into buying that product in the first place.

We cannot have ‘responsible service of alcohol’ until we start taking responsibility for all that actually comes with alcohol, and not many of us want to do this, we want to check out, forget about it and simply enjoy our drink. We have much to consider when it comes to understanding what true responsibility is.

Further Reading:
Alcohol: Cancer, ‘Safe’ Consumption and Choice
Getting Honest About Alcohol
Domestic violence … are we all responsible for the cycle of abuse?

Martin Gladman is a Social Worker, Counsellor, Life Coach, Teacher, Public Speaker and Complementary Therapist based in Melbourne, Australia. Martin presents and teaches simple and practical ways of responding to life, supporting people of all ages to rebuild, reconnect and recommit to living a life that is vital, full and healthy. Martin has supported people world wide, of all ages and backgrounds, to re-engage with life, establishing real and sustainable change for the better.