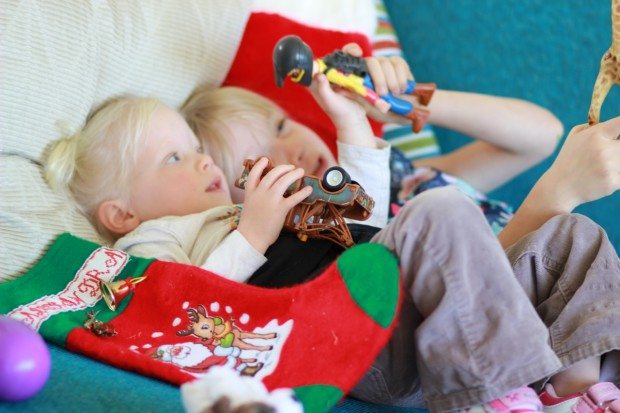 Family, Relationships 733 Comments on Christmas and Children and Being Together

Christmas and Children and Being Together

By Raymond Karam @ray_karam · On November 15, 2015 ·Photography by Leonne Sharkey

With Christmas fast approaching, as always it is time for reflection. My partner and I are the parents of five young children and before we went shopping last year, we reflected on Christmas the previous year. We remembered it being a fun time but we were also looking at what we wanted to have different last year. We discussed it and one thing we remembered was the children not really playing with their presents for long. We couldn’t have done much more with the type of presents because we had asked them for a list and shopped from that. So we discussed what we could do differently.

We discussed about buying more ‘family’ presents and fewer individual presents. We noticed the previous year that the children took their presents and played beside each other, but not really together. They discussed things between themselves but didn’t really have an overall feeling of being together. I thought it was a great idea to buy more family presents and so we discussed the types of presents we could get that would fit. As usual the children made us a list and from that list we chatted about what presents would suit what we had decided together.

We shopped with that intention – to make any gifts or presents about bringing the children together.

It is like we made a clear plan and from there we shopped. There were no specifics, but more of an overall theme with a few points, and the rest was left to the day.

On the shopping day, we only spent about 3 hours shopping for all the five children and nearly had all of their presents bought and wrapped by the end of it. We put them under the tree with their names on them. Some presents had one name, others had two and others had all five. When the children came home, we watched them read who they were for. At that point it was about two weeks until Christmas and we listened to the children trying to work out what their gifts were under the tree.

The night before Christmas we were all together. We had dinner and drove around in the car in the local area, looking at all the Christmas lights at other people’s houses. We commented on how many people were together with neighbours, and how there were children playing together in the streets. It was all very similar to the theme we had felt about last Christmas being not about gifts or food, but about being together first.

The children woke up in the morning and came to find us. We all said good morning and spent some time in our bedroom before heading out to the tree. The children were very content just being in the bedroom with us.

There was no running or crazy play, no continual asking about presents – just a moment in the morning we were simply all together.

We went out and gave the children their ‘Santa’ sacks and they began searching through them. We gave them all some collector animal cards that you get free at the shopping centre; they had all been collecting them into folders. They spent the next 20 minutes just with these cards, discussing them, swapping them and putting them into their folders. They only had two folders between the five of them, and so this too was a shared project.  My partner Sarah and I were looking at each other and smiling. The children were just so content and not rushing to get to the next present, or even go further into their bags. It was unlike the previous year, when they rushed through opening their presents, and then didn’t really play much with them. They were content just to be together, talking and discussing their cards.

This said a lot for us, and for me at that moment, Christmas was done, complete you could say. I have become aware of many things thanks to the consistent and loving support of Serge Benhayon and Universal Medicine, and this was another one.

As parents of five young children, how we are together as parents really sets the mark for how the children are.

With our discussion and reflection about this time of year for us and how the previous year didn’t really feel that great we made a decision on how we could grow last year. This was based also on what had been going on in the house over the past few weeks, and what we felt together we all needed. Did we just need presents and a day or was there something deeper we could see that we all needed? With this discussion the intention for how and why we were buying things for the children changed and from there this transformed Christmas before we had even shopped, given presents, or experienced the day.

This is the power of intention and connection and we could see the massive change this made… from the 2 weeks prior to Christmas day, to the drive around the local area, to how the children were on Christmas morning and then to how they went about opening their first presents.

Christmas is but one day a year but from this we can see that no matter what is happening the intention in which you do something has real power to transform any situation. The more we connect with people, even in just our own family, this can change others as well.

It doesn’t just change for one day either, because the children have already asked for what they want this year and can you guess what that is? You are right if you said presents that bring them together: they didn’t say that but the things they asked for are things they all play together with.

Now for me, that’s not only what Christmas is about, but what life is about –– bringing people together, truly together, and not just ticking a box.