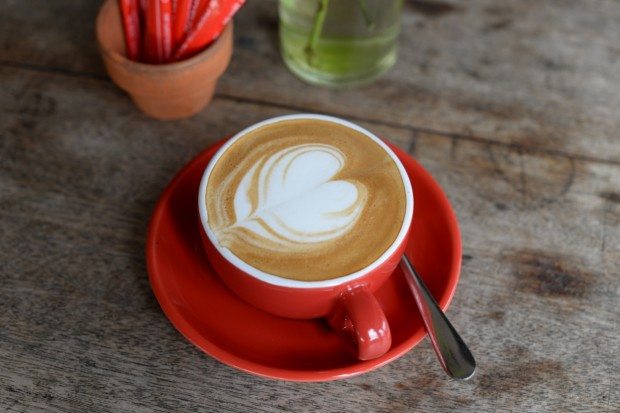 About a year ago, when I first started working as the general manager in a deli/café, I decided I needed to do a coffee tasting. Coffee is a huge part of the business and as I hadn’t had any coffee for at least 4-5 years, I wanted to get an understanding of what it is that we sell. So I tried a decaf espresso, which was full-on.

FROM HIDEOUS TO REALLY TASTY

I hated it. Espresso, which is pure and neat in its extraction of the coffee, has nothing to disguise it and my reaction was immediate, as if my taste buds were saying to me: “What are you doing – are you crazy? This is hideous!”.

I then tried the espresso with some soya milk and this was not so invasive but still full on… I only managed to have a couple of sips of each and that was it. Then, an hour later, a headache appeared and my stomach started to feel weird.

The one thing that really shocked me though was the quick change from “What the heck are you doing, this is hideous” to (after a disguised, milky, soya flat white and a few sips of that) going “Hmmm… this is actually really tasty”.

How quickly it started to grow on me! It reminded me of when I first started to drink alcohol and started smoking. They were both naturally hideous and my body didn’t want to do either, but I overrode what I really felt so I could fit in, be accepted and look cool!

UPPING THE COFFEE ANTE – I GET SEDUCED…

My ‘romance’ with coffee didn’t end there – recently I had to choose a new blend of coffee for our customers.

So the coffee tasting began… I was having a look at the crèma, which looked perfect, and the smell was alive with lots of different scents – liquorice, almond and chocolate jumped out at me!

At that point I was slowly getting seduced all over again and I thought: “I’ll try it – I need to know what the coffee I have chosen for the deli tastes like.” Isn’t it interesting how the mind will quickly justify an action to make it OK to do! This was the start of the override again…

FEELING THE IMPACT OF COFFEE – THE HARD WAY

But for me, it was too late – by the end of the second flat white I was really starting to feel ‘off the wall’ and super-racy! “Oh my goodness! What have I just done?!” I’m thinking. It felt like I was on drugs big time… really bad speed, or something like that! My head felt really strange – like it was going to pop or explode. My heart was going super-fast, and I was completely off the wall in my behaviour – all the deli assistants were laughing at me, as they could all see the change in me.

It lasted for quite some time – we’d started the coffee tasting at 10.30am and I was still feeling traces of it at 8pm that night – and the following two days I had these really intense, full-on headaches that were hideous. I could see how people can get hooked – if I’d had another coffee, all those symptoms would have disappeared instantly.

This week I had another trip to the roastery, but this time I decided that I would spit the tasting – my body thanked me for this!

I LOVE MAKING COFFEES, BUT WHY WOULD I BE ANYTHING ELSE BUT ME?

I love the smell of coffee and I still do, but I don’t like what it does to my body so I don’t drink it any more. It’s like some foods and how they taste and what they do to my body: I have decided to leave them out of my diet because I don’t like how I feel after I’ve eaten them, even if they taste amazing at the time – it’s not worth it!

However, this most recent coffee tasting experience really confirmed for me that I just don’t want to feel like that anymore. It also confirmed for me what happens when I let my mind override and ‘explain away’ what I’m really feeling in my body and know is right for me.

I feel so AMAZING when I’m just me – without anything else influencing me – and I know now: NOTHING ELSE is acceptable!

I’m at a point in my life where what I have chosen is SERIOUSLY AWESOME and I feel SERIOUSLY AMAZING for it. I feel so clear, on to it, light and consistent. I have so much respect for my body and myself that I am not prepared to compromise any more.

Inspired by the Awesome work of Serge Benhayon and Universal Medicine.

Living right in the heart of London with humanity and loving it, running a cafe/deli in Mayfair. This is where I get to enjoy some of my favourite things in life - delicious food and people. Any spare time I like painting, photography, dancing and just recently dabbled in some singing which I absolutely loved! Haven't tried doing them all at once thou!