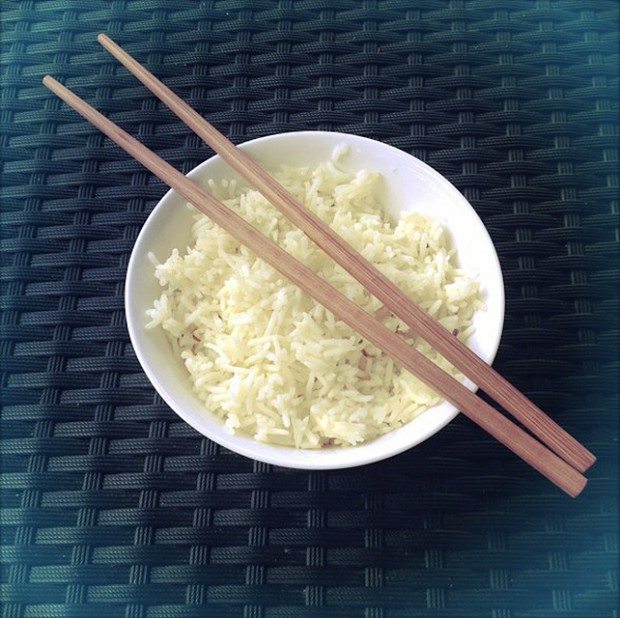 Healthy diet, Healthy Lifestyle 297 Comments on Growing up Chinese: hiding behind my diet of rice, a cultural document

Growing up Chinese: hiding behind my diet of rice, a cultural document

As long as I can remember, rice has been something I could not give up. Well, I am born Chinese, where no-one would question this as unusual. Rice is served almost in every meal; I was so attached to my rice that I grew my own once.

Rice, being a staple in Asia, is used extensively; from the plain steamed rice that accompanies a meal, to the sweets made with glutinous rice, steamed sticky rice in a lotus leaf wrap with meats, the ever famous fried rice, rice noodles, breakfast congee (rice cooked in water until a porridge consistency), steamed rice rolls and so on – who would ever question the consumption of something so inherent to our culture and traditional identity?

I was no exception, and although petite I could probably eat more rice than someone twice my size, and not really gain weight. If there was rice, I would be content. When travelling, rice is the first word I learn in a foreign language, just so that I can ensure my ability to order it. In my opinion, eating other carbohydrates like potatoes or pasta doesn’t even come close to the feeling I have when eating rice. I would also choose rice over meat, as meat fills me up quickly; but rice, I can eat a lot of it. Being always hungry, rice has become my comfort.

Rice, unlike alcohol or drugs, is not illegal if you buy it under 18 years of age, or consume it in public. But like any addiction, it takes a lot of courage and honesty to feel and acknowledge what is really true for the body. From young, we were told that we are good children if we ate a lot of rice, since rice, being less expensive than meat, is consumed in much greater quantities. We were also taught, through a traditional saying “fan hey gung sum” (direct translation: ‘the energy of the rice invading the heart’, which is pretty spot on), that it is natural to feel drowsy after eating rice, and most would not question it. We would just feel somewhat unlike ourselves and unable to have optimal clarity after a big rice meal.

Yet the ‘comfort’ that results from eating rice is worth it, or so I told myself, even if being a bit muddle-headed was the payoff. I have long since given up alcohol, and sugar is not something that I crave (probably because all the rice I have been consuming has made that redundant), milk and chocolate were foods I had disliked since young, and when I had worked my way even into relinquishing cheese, oh boy, was I not prepared to give up rice. Whenever life felt stressful, I would make sure rice, a lot of it, would see me through. As such, this could be a situation that would go on, never to be questioned for the rest of my life.

But in 2012, I joined an Esoteric retreat organised by Universal Medicine in Vietnam; in fact, it was my first time joining anything Esoteric. Throughout the four days of the retreat, rice was not a part of the meals. I had enjoyed the retreat and its teachings, group discussions and wonderful nurturing food tremendously. Having said that, the experience also allowed me to feel how hungry I was without my rice. It was the beginning of an unmasking of the emptiness I had been covering up all my life. I felt how I had numbed myself from my own light and how I had been hiding who I truly am with this feigned comfort given to me, such as by consuming rice (I had myriad different numbing techniques, apart from rice). This emptiness was not something that was easy to swallow, and it so much fed into my arrogance and ignorance that on the last day of the retreat I went to the market and ate a plate of rice!

Throughout this past year, what has been initiated from the retreat has given me the courage as well as the support to be much more honest with myself. Who would have imagined a female Chinese, who cannot live without rice, would one day, not out of abstinence, nor because someone told her that rice is bad, but through an honest exploration and self-love, choose not to include rice in her diet anymore?

For in the stillness of my heart, overriding how my body is feeling is not okay anymore, hiding from the fullness of who I am is not okay anymore, and being led by a perception of any culture is also not okay anymore. Ultimately, when I chose to be in the livingness of who I truly am, the need to numb myself disappeared. It is truly no longer okay to perpetuate what is not true even though it has been accepted as normal. Once I realised this, my attachment with rice simply ended.