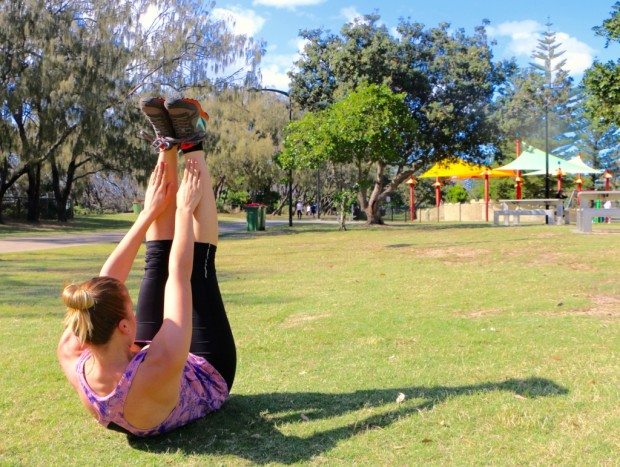 By Anonymous · On November 7, 2015 ·Photography by Luke Yokota

My experience of exercising over the last 35 to 40 years, would be to say that when taken to great lengths it can become an addiction – like any other drug. With this addiction I would use exercise to numb and avoid the feelings of emptiness I had, to control emotions that would arise, and use it as a way of expunging any pent-up feelings.

I used exercise to fill the void. It provided a high that encouraged me to go back to the gym to get my next fix.

When I was working, before I had my children, I felt I had exercise in balance. This was in the eighties when aerobics had just started and the classes were more organic and less frenetic than they are now. I would go to two, maybe three classes per week, and walk.

But after having children and spending more time in my own company without the distraction of work, a feeling of emptiness started to rise up, as well as a feeling that I wasn’t doing enough by just being at home, even though I adored my two children and loved caring for them. My daily routine was built around the exercise class times and if I couldn’t get there then it had to be a power walk. If I wasn’t able to exercise, either because of time constraints or because I was exhausted, I would become frustrated, restless, and at times angry.

The emptiness that I felt was such a deep pain inside. I didn’t know what it was and I just wanted to get rid of it. It was a bottomless pit that nothing could fill – not food, my husband, children, friends, movies, travel or any other distraction that I tried. And as it turned out not even exercise; however, it kept the uncomfortable feelings I was having at bay, just like a ‘drug’.

If we were doing things on weekends or visiting friends and family, again, the exercise would come first. We couldn’t go anywhere until I’d been to a gym/fitness class, or we’d have to leave early so I could get to one upon our return home. And if the gym was closed for any reason I was not happy!

I thought I was doing well by not using alcohol and I thought I was okay because what I was doing was contributing to my health and fitness so that I could better cope with life. However, it had an insidious effect on me, and my relationships: nothing was being dealt with, instead only being further buried.

I didn’t know how to deal with the difficulties I had in my relationships, or with my lack of self-worth. I would withdraw, become frustrated, tense or angry and I didn’t feel that it was okay to be feeling any of this. I felt frustrated that my relationship with my husband wasn’t working so I’d go back to using exercise to make myself feel better and to prevent me from getting to the point of feeling the absolute devastation of the lack of communication and intimacy within my marriage.

Thirty years later, after my marriage breakdown I was diagnosed with third stage adrenal exhaustion. I thought I had the side benefit of being extremely fit but due to my exercise addiction I was pushing my body so hard that I was experiencing respiratory infections every six weeks and then was eventually diagnosed with third stage adrenal exhaustion and depression.

I’m very grateful to have come across the teachings of Universal Medicine and Serge Benhayon: with the support of Esoteric Practitioners I’m learning to connect with myself and deal with any feelings as they arise. I now have the understanding that I am much more than what I believed myself to be.

I realised that I was using exercise as a drug to run away from myself.

For three years I stopped all exercise apart from gentle short walks which were incredibly important, and Connective Tissue Exercises, which are very gentle and powerful and I was able to do those lying down. I couldn’t do anything without going into the drive and push of the way I used to exercise. At the beginning, this was all I was able to do for some time. I’m now rebuilding and enjoying exercising, using an exercise program provided for me by an Esoteric Practitioner. This program has been tailored for me and for where I’m at, including weights, using them in a gentle and very supportive way. It allows me to stay connected with myself and it feels great!

The way back to exercise has been a lengthy and considered one. To heal the adrenal exhaustion (which is still lingering) has required me to completely surrender whenever I feel tired and to avoid any form of artificial stimulation through sugar, caffeine or stress. I was provided with programs very specific to my energy levels and this has required me to be very connected to my body and the way it feels so as not to overexert myself and increase the exhaustion. The moment I feel any fatigue is an indication for me to stop. Something I was able to connect to throughout this process was that if I rested as soon as I felt the feeling of tiredness come on, the feeling of depression and negative thoughts would dissipate.

I also found enormous benefit through attending the Universal Medicine healing courses – as well as support through other Esoteric Healing Modalities, including Chakra-Puncture. I began to understand the importance of being aware of how I was feeling and the draining effect of giving my power away to anything or anyone. Learning to say ‘no’ became very important.

I have also been working in conjunction with my doctor, whose support and guidance has been a very important part of regaining my energy levels and my health.

I feel that healing my exercise addiction and adrenal exhaustion would not have been possible without me being absolutely inspired by Serge Benhayon and those involved with Universal Medicine.

Further Reading:
Serge Benhayon on Fitness, Physical Exercise and the Gentle Breath
From Sport to Exercise: A Journey of Self-Acceptance
Serge Benhayon Didn’t Tell Me How To Exercise – I Connected To Me And Went From There