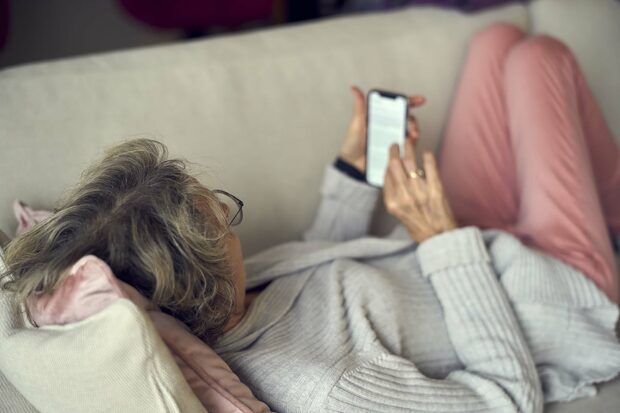 Healthy Lifestyle, TV / Technology 4 Comments on How I Have Come to Not Be Owned by Social Media

How I Have Come to Not Be Owned by Social Media

By Julie Goodhart · On January 4, 2022 ·Photography by Nico van Haastrecht

I was probably considered to be ‘late’ to social media, not having grown up with computers and being an adult when smart phones first started coming on the scene. Having said that, it is completely true that this matters not when considering the seeming power that social media has and thus how addictive it is, no matter how long one has been exposed to it.

I started with Facebook mostly to post pictures and basic information and also to ‘reconnect’ with people I haven’t seen or heard from in years.

The concept of gaining followers, friends, connections, likes or loves, always felt very artificial. The connections are easily faked. For example, I can ‘friend’ with someone I went to high school with and whom I may or may not have actually been friends with then, and it may feel that a door of transparency has been opened and a relationship rekindled. But this seeming transparency only extends to what each person in the ‘relationship’ is willing to post on the social media platform. It is possible that in truth, I really know nothing more about the person I’ve just connected with than I ever did in high school. Knowing where someone goes, what they share about their family, what they look like or what they do, doesn’t develop the intimacy that a true connection can bring. The only thing that’s changed is that I now know where that person goes, who is in their family, what they look like today (and can choose to compare and judge these images with how they looked in high school), and what they do that they’ve shared with the world.

As another example of the tenuous connections we have on social media, how many of us have made friend requests to someone we don’t know and have never met, and then once the request is accepted, there is no direct communication that happens from that point on?

There is also a much deeper game playing out in social media that can be frightening and surprising in its deviousness – the fact that the usage of social media is highly addictive.

Along with Facebook, I started using LinkedIn as a professional networking tool, posting industry and work-related articles I felt inspired by, occasionally sharing updates myself and liking posts of respected friends and colleagues. All of us who have used social media are familiar with the feeling of one of our posts getting ‘liked’. And one like is never good enough.

How easy is it to spend time posting things not because it really means something to us or feels important to share with humanity, but because we think it will be something that will get a lot of likes! And how much time can be spent – no, not spent, but truly lost, wasted – in searching for and posting things that others will react to! Not only that, but the need for attention and confirmation is immediate. How many of us have ever posted an article or update or reacted to someone else’s without actually reading it (because that would take too much time to read, but we’re sure we’re got the gist of it by reading the headline and the first sentence)? I sure have.

There are many hooks in social media to keep us involved. Everything from seeing the emotional reactions of others to our posts, to a truly endless stream of ‘friend’ suggestions to spur our curiosity and memories of ‘forgotten’ connections and thus get lost in reminiscence, to advertisements that intentionally speak directly to our interests, to memes and super short video clips that have gone viral (meaning, we will want to see what everyone else has seen), to groups we can join that appeal to our need to be included and to be part of an ‘in’ crowd; and the list goes on and on. The fact that there seems to be constant updates and new features to social media platforms is no coincidence and is completely contrived and intentional.

Even though I was really only using Facebook and LinkedIn, and Twitter for a brief period of time – until I realised how much effort was involved in keeping up with it and staying ‘current’ – it did not matter. I was well and fully addicted to it, just like so many others are.

Here’s when I knew this addiction was real: I remember the feeling I had when I put my phone down after twenty minutes, an hour, or more. The complete surprise at realising how much time had gone by when I did absolutely nothing really meaningful or productive. (Sometimes it was the shock of experiencing the movement the sun had made across the sky and the way the light changed while I was in what felt like an alternate universe.) The lethargy in my body that was so hard to shake. The feeling of a morning, a good part of the day, an evening lost, when I could have been sleeping, or going for a walk outside, or spending time with my family or real friends, or doing some much-needed work around the house. Even times when I was doing something else or was with someone else, but had my phone ever-present and would find my focus shifting to a ping, a notification, so that I was actually not present at all with what I was doing and who was with me. I allowed myself to be in withdrawal when I was using social media and it was very much like coming down from a high.

It was sickening and horrifying. And equally horrible was to see people around me doing the same thing – becoming so checked out on social media that they were completely oblivious to those sitting next to them at the same table in a restaurant. What has happened to us as a society? What have we allowed in… and for the most part not questioned at all?

It was this combination of feeling my own withdrawal from the world and seeing it in others, that helped me turn a corner. And from there it was simply a choice to not live like this, no matter what others were choosing.

In addition to accepting the addictive qualities of social media and knowing in my whole being that I had a choice in how I used and accessed it, I was able to end the hold that social media had on me.

I found myself taking a break from Facebook and LinkedIn and turned off all notifications, including email notifications. The apps are still on my phone and laptop, but instead of messages being constantly thrust into my face to get me to go to the app, I now have to consciously choose to go there to either see what’s new or find something in particular. Was I concerned that I would miss out on anything? Not really. I know the groups that I am most connected with and choose to go there for updates from time to time. And I still pay attention to direct messaging in social media. If someone genuinely wants to get in touch with me, I am there.

I began using my phone primarily for the original purpose of a phone – to talk to others – and also for practical information like chats, weather, maps, notes and reminders to myself, etc. I removed apps that I didn’t use much and that had no meaningful purpose to me. Do I miss them? No. I don’t even remember what some of them were.

I also began making a commitment to not have my phone at the dinner table, or on a walk in the neighborhood unless I was using it to take photos or to stay accessible to someone at home. I now keep my phone in my purse when I am out running errands, instead of in my back pocket where it used to be more accessible. The truth is, no matter how crazy the world is that we live in right now, why would I want to miss a moment of it by having my head down in an artificial universe?

When I go to social media now to see what’s new, I’m much more honest with myself. Most of the times that I click on a social media app, it’s the first few updates that appear in the feed that have the most meaning and inspire me, and nothing more is really needed at that moment. I’ve learnt to be settled with just a few minutes of viewing posts rather than get caught up in scrolling through the many, many posts available. For this is one of the main hooks that was built into the platform from the beginning, to ensure users do just that – use and use and use and use.

Lastly, I have been taking more care in considering why I want to post something on social media and what I’m feeling when I go to a social media platform. By bringing more awareness to whether I’m wanting to post something because there feels to be a specific purpose in sharing or whether I’m seeking some kind of attention, gratification, relief or confirmation, I’ve been able to bring integrity to my use of social media by not playing the game – realising that it has a place but without ditching it all together.

The interesting thing about the so-called empty connections in social media is that they absolutely do not have to be empty, and in fact, it becomes a testament to the unceasing and unchangeable oneness that we all inextricably are, across the globe, no matter what manner of struggle or anxiousness, loneliness or love and joy we each experience any given moment.

For when I notice the reactions and comments of others, I am always reminded there is a real, living person clicking the button or typing the words, and I wonder how they truly feel in that moment when they saw a post and responded, where they are and what they are doing. In this simple realisation there is connection, no matter how brief it may seem, and no social media games or manipulation can change this.

Further reading:
Social media shame or success – can there ever be a winner?
A Four Week Computer Course with Simon Asquith that Changed my Life
Crying out for connection: technology and us