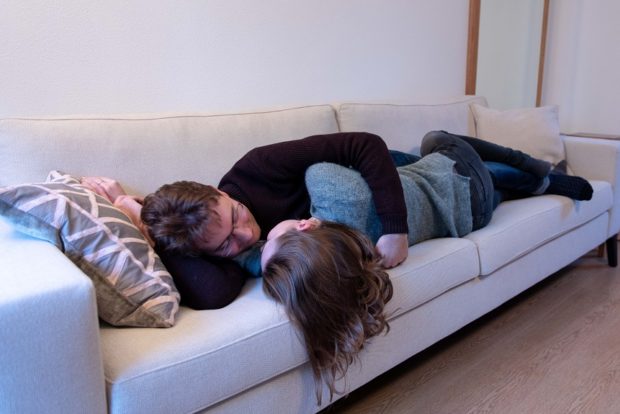 Couples, Relationships 172 Comments on I’d Rather Lose my Arm than my Man

I’d Rather Lose my Arm than my Man

By Rosemary Liebe · On January 21, 2019 ·Photography by Nico van Haastrecht

Whilst at a friend’s house recently for dinner, we decided to relax for a while on the couch before eating, to catch up and talk about how life had been for us since we last spent time together. My friend suggested we make ourselves comfortable on the couch while dinner was cooking, and as we were both feeling a bit tired from a long day and a busy week we decided to lie down, one lying each end with our legs sort of entwined and up over the back of the couch. Both being tactile people, we are not averse to physical contact, which is good considering the position of our legs resting on top of each other’s.

As we lay talking (which was for quite some time), we each enquired to the comfort of the other’s legs and shifted to make ourselves more comfortable, or shifted to ease any pressure on the other. At one point whilst we were re-arranging ourselves, I remarked to my friend how different it was now to care for myself compared to when I was a younger woman and had been lying with a man and rather than disturb him, for fear he would take the opportunity to move away completely, I would lie with my arm underneath him ignoring the numbness, stiffness and encroaching pain in my arm so that I could immerse myself in him and the feeling of being wanted for a bit longer. Not wanting to lose him or the feeling of being wanted was stronger than any consideration of my body.

Expressing this to my friend, we laughed because this was her experience too. She expressed the same feelings and emotions, and we laughed again at the ridiculousness of it whilst being astounded at the total lack of care for ourselves. This was huge as we both came to the same conclusion that back then we felt we would “rather lose my arm than lose my man.”

I’d rather lose my arm than my man!

Seems a bit drastic doesn’t it?  And I’d bet most of us would say that’s ridiculous, that’s not what I would choose… but how many of us have lain with a boyfriend/husband/lover’s head or torso on our arm and remained in that position regardless of the numbness and stiffness slowly overtaking our limb, ignoring the pain because of the fear that if we ask the chosen one to move he may move away completely, and we desperately want to hold on – not only to the man but to the feeling of being loved and wanted for as long as we can. So, we manage to put up with the discomfort, pins and needles, numbness and pain we are by now feeling in our arm… the total overriding of our body’s needs in favour of our emotional wants and needs being temporarily assuaged.

As the evening progressed, my friend and I continued to discuss this and wondered whether men had the same experience – of putting up with physical discomfort in the same way in order to extend the feeling of being wanted and loved: being women, we couldn’t be sure but as we were able to think of the many ways in which we remembered overriding our bodies’ needs, to the point of abuse, we knew that we were all in the same boat when it came to disregarding our bodies. Perhaps some of the ways were different for men, but abuse and disregard would be there in their lives nevertheless.

What was once abuse is long gone, but while we are in any way looking for love, appreciation or emotional security outside ourselves, we are in fact in disregard of our true selves. As we discussed this, we both agreed it can be easy to believe that we no longer abuse our bodies because we are not so obviously disregarding ourselves as we once did. The more gentle and loving we become, the more obvious these subtle and finer abuses are still playing out and can be felt in our body – requiring honesty on our part to recognise and then work with these subtler aspects. We agreed there is a need to bring an even greater sense of tenderness and care to ourselves until we have built into our livingness an even greater and more delicate way of being.

Published with permission of my friend.

Further Reading:
Discovering self-care and bringing it into my life
Self Care
The rejection game – how to overcome the fear of rejection