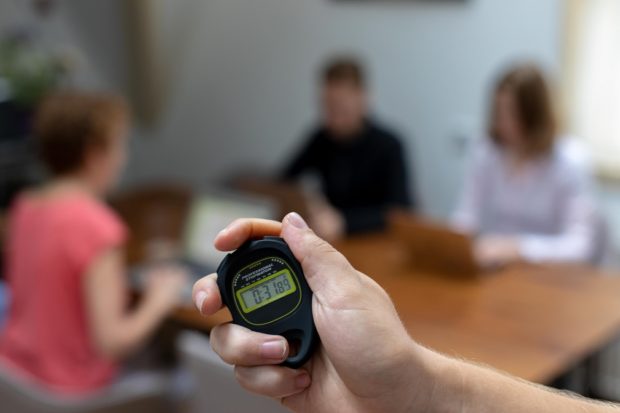 By Anonymous · On September 4, 2018 ·Photography by Nico van Haastrecht

I was unexpectedly placed in the position of being forced to take a timed test quite recently.

The surprise test was part of a professional development day – a ‘fun’ activity with a screen technology, where several colleagues and I were asked to complete a task using the said screen under timed conditions. Our times were to be recorded and our names placed on a leader board for the entire staff to view. It was immediately evident that there would be a winner, many close contenders and even more ‘also rans’ or losers.

I was very disturbed by what unfolded. Before the buzzer went there seemed to be a dismissive sizing up of each other, a mental assessment of how things were going to play out. This instantly created a sense of individual isolation in the entire room, which became cold.

The rules were that no one could help anyone else until they had completed the task themselves and then any potential helpers could simply point to the screen – not physically show how to complete the task.

Knowing next to nothing about the technology, I prepared myself to wait until support was offered. This brought the opportunity to observe how people went about ‘playing’ the game.

However, the moment that the timer started, they became very intense and their movements hard, forceful and excluding of everybody else. In between bouts of intense activity, a couple of them glanced at me to check out how I was going. There was contempt in their look that communicated ‘loser,’ derived from the mania they had gone into in order to complete the test successfully in super quick time.

Things were taking a while so I asked my closest colleague how to get started with this. The supervisor swept over to us and vetoed my colleague’s support as he was yet to complete the task himself. I felt the entire left side of my upper body, including my arm, go into a kind of collapse, accompanied by a feeling of sadness as I felt how this contrived situation of timed competition, of a winning and losing situation, had placed my colleagues into an ‘every man for himself’ mindset, which was totally unlike themselves. I was out of the game because I couldn’t even get started and I could not reach my colleagues to connect with them in our usual way, nor to ask them to support me in the task. Our usual sense of mutual support and working together had completely gone out of the window in favour of recording a winning or respectable time and securing a place on the ladder.

As people completed the task, the scores were placed on a leader board and many staff members commented how they’d like a rematch in order to get to the top of the ladder – to prove their worth and skill!

I was stunned to hear people say they’d enjoyed this activity after what I had observed. Everyone wanted a second opportunity to prove they could do it – they could improve their time and knock the winner, who was having a moment of inflated recognition, off his podium.

How could such a trivial, everyday task place normally lovely people into this state of intense competition in such a short period of time (the activity took four minutes)? What made them cut themselves off from each other to get a reasonable time, if not, the winning time, with such disdain shown for those who were self-evidently going to be ‘last’?

Our innate nature is to cooperate and to support each other in a loving way.

Contrived situations like this one remove us so far from this innate essence.

Moreover, as an educator, this begs the huge question of what is occurring within our children and their bodies as they progress through an education system that measures progress through timed tests, which rank and order students’ scores – even as far as on a national scale – from the age of 8.

If one four minute test could generate so much competitive angst, intensity and social isolation, what effects do the multitude of tests in education have on our children, their bodies and their world view, especially when such tests deliberately foster the ‘every man for himself’ mindset? Can we really continue to brush off such considerations with blanket statements like, “It develops resilience,” and that, “It’s only a test”?

In our worldwide education systems, some tests, and one’s achievement levels therein, dictate what University degree or career one can aspire to, and from there, one’s path in life. How do we measure or even begin to understand the extent to which this ‘test effect’ is compounded many, many times over in such pivotal real life situations? Or do we merely witness the exponential rise in childhood mental ill health and youth suicide, feigning to not be aware of the causes?

From this four minute observation, it appears that we all need to consider deeply what occurs in these tests and the highly deleterious effects they have on all participants – including the ostensible winners. Based on what was witnessed, I would say that the moments of ‘victory’ are brief and shallow and that truly there are no real winners at all. So why do we do continue to endorse such tests and force them onto our children?

Further Reading:
A life of purpose – does the way we are educated affect our attitude towards life?
The True Purpose of Education – One Size Fits All or Evolution?
When exam stress becomes a matter of life and death: The effect of exams on student health and wellbeing