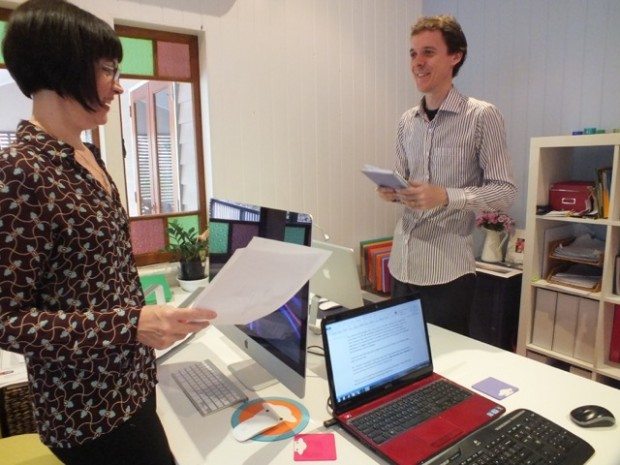 For most of my working life I have been involved in or surrounded by abusive or disharmonious workplace relationships. I tried over and over to escape from these situations but found that they presented again and again, just with a different face.

In my current workplace it is common to hear stories from staff members about situations of harassment and bullying. These employees generally stay in their jobs as the region is one of high unemployment.

It appears, however, that my own experience and those of my work colleagues are not isolated events. The Australian Human Rights Commission refers to international research which estimates that 400,000 to 2 million Australians will be harassed at work (in 2001) while 2.5 to 5 million will experience workplace harassment at some time during their career.[i]

These statistics are alarming and certainly highlight that the way we are relating with each other in the workplace is not a true way of living and relating as human beings.

Abuse in the Workplace

For many years working in this environment impacted upon my own health and general wellbeing. It felt ‘unsafe’ to be myself and I felt powerless to call abuse when it presented.

The abuse which I experienced took many different forms and included being spoken to harshly and publicly, slamming doors, being overly-demanding, setting unachievable goals, ridiculing, starting malicious rumours, denying a voice, discriminatory comments and exclusion from information that related to my role.

I would drive to work heavy hearted and worked through the day in extreme levels of anxiety, always documenting my tasks, responses and actions for the next occasion where I would come under scrutiny.

I did all I could to override the awfulness that I felt and succumbed to ways that allowed me to be easily controlled – to be silent, to do as I was told and to work fast and relentlessly. What I didn’t realise at the time was that this way of working was hurting me deeply.

In one instance the abuse built to an intolerable level and escalated when I injured myself at work. I was no longer able to handle the emotional abuse now that my body was in physical pain; I sought support from esoteric healing sessions with a number of different Universal Medicine practitioners.

The practitioners supported me to introduce gentleness and self-nurturing into my daily life and in time, love for myself started to expand. My thoughts were noticeably more sensitive and honouring of myself and others and my body didn’t need to hold itself in constant tension and protection in readiness for the ‘next attack’. Living like this had become unhealthy, not to mention draining on my energy levels.

Saying No to the Workplace Abuse

As I became more loving and tender with myself I started to see the world and people around me a little differently. I became much more aware of what was truly going on and I found that what felt like a personal attack from another, was really them reacting to something about themselves or something about their own lives. I found it much easier to say No to the abusive behaviour and could do so in a way that was firm and to the point, yet constructive and rational.

In time I observed how people at work began to cherish a more collaborative and supportive work environment based on a new level of care and concern for individuals. Many staff chose to socialise rather than stay behind closed doors and people were able to share more about how they were truly feeling.

This experience showed me a new way forward; the days of running from workplace conflict were over.

My Part in Workplace Abuse

Within this healing process I began to feel my part in all of this and questioned the role of my responses to abuse and whether I too had been an abuser. You see I always viewed myself as a victim and never as a perpetrator in any of these situations.

In each situation of conflict it always appeared that the other person was attacking, aggressive or rude towards me. However, I was failing to see that I was approaching people with a deep wall of protection in an attempt to not be hurt.

I didn’t allow people to see my sensitive, tender and loving side and I didn’t allow others to feel how much I cared about them either. In fact, on many occasions I had judged people and rejected them well before they had a chance to reject me. So in the end it was difficult to determine whether I was reacting to others or whether they were reacting to me. Who was actually abusing whom? These lines were no longer clear, but one thing was sure – none of it was love.

I have started a new role in the same organisation and, in this role and for the first time, I have put love first.

As a result of the changes that I have made to the way I connect with myself and with others, my life and workplace relationships are now truly amazing. There is a new closeness that I feel where no words are needed because the feeling of appreciation is so powerful that it is already expressed. There is an honesty and willingness to engage, to genuinely support each other and to bring true connection and tenderness to the workplace.

I was once motivated by career progression but now my focus is on living lovingly each and every day.

There is a work model here that revels in simplicity and beauty – love is our way forward and our workplace relationships need it too.

Further Reading:
Universal Medicine: Practical Applications in the Workplace
Self-Care at Work Does Make a Difference
Why Work? What Is Work About?