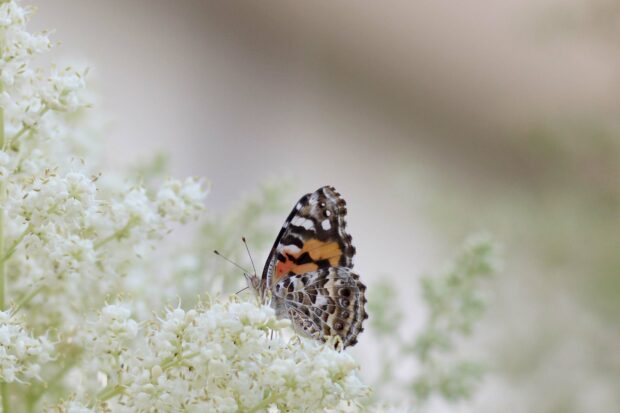 The Bulldozer, and the Butterfly

By Anonymous · On February 7, 2022 ·Photography by Leonne Barker

Why is it as men and women we can get into the energy of drive and literally push ourselves without regard for our bodies or others around us? For many of us, there is a root cause for why we do this.

Around eight years ago, in my mid-forties I had a revelation which helped me to change the way I worked and moved at work, in contrast to my earlier years, when I began as a late starter in the construction industry at age 32.

Whilst staying at my parents’ house interstate on a yearly visit with my son, I was speaking with my father about something in the kitchen and as usual, my point of view was brushed aside in a type of one-upmanship game that had been going on between us for a long time, where my part in it was to seek approval from him.

This time I finally stood up for myself, sensing I was not going to let this happen again; harsh words and reactions followed. I told him that my brother and I had always been trying to gain his acceptance and love. We were always looking to be acknowledged for what we did, our success in business, our work achievements or even knowledge of the temporal world, all about the doing, when all we really wanted was to be loved as his sons. After speaking my truth, some heated discussion followed when I even swore at him. I then left and went to my room, my young son coming with me, awkwardly, after witnessing the whole scene.

I explained to my son honestly why I had reacted: that I had to say something to stop this ongoing arrangement and apologised for my reaction, even shedding some tears as I spoke about it. Then I lay down on the bed and bam … a revelation! What I had been doing for so long to prove myself a man, and without any blame towards my father, was clearly revealed. The root was about trying to prove myself and be confirmed through what I did which developed incrementally from childhood and progressed through adulthood, resulting in taking on huge projects in the construction industry, working physically very hard.

As I lay on the bed it all just flowed through me and I started to write about what had been unlocked in me, about trying to be tough to prove my self-worth, being hard on myself and others at the same time.

As I reflected on what had been going on for nearly a decade, I recognised I had been running on two very distinctive types of energy, a kind of split personality so to speak: one being the tender, gentle, naturally loving and friendly guy – and the other, the bulldozer type, the hard task master, the ‘get things done man’. With the latter, I was drawing on a hard, angry type of energy enabling me to endure much pain as I pushed against the elements, mainly in construction type labour. This hard energy created the tension required for me to fulfil my duties and complete the task at hand.

In this bulldozer mode, I would become short, sharp and critical of others who weren’t soldiering with me in a self-made army. I would become hard, numb to others’ needs and critical if they could not keep up, accusing them of being weak, pathetic or weak-willed. Basically, I was not confirming or enriching myself or others while working, which was taking any fun or joy out of it, turning it into the struggle of the battalion of the damned.

The bulldozer state did not and would not suffer fools. I became judgmental; frustration with myself and others was a constant theme, as was comparison and criticism of those who could not keep up, or complete their job with the same level of drive. But this state was not really me, just a way of protection. And I would always be looking for relief after these working days with beers, alcohol and smoking dope as a reward for what I put myself through – just to prove my self-worth. I started hardening to not feel the real tender, sensitive and gentle me that had given up on himself and the idea of tenderness, sensitivity and love as a child.

In juxtaposition to the bulldozer mode, I began to re-align to the truth of the tender, gentle and very sensitive being of who I really am; who had learnt a long time ago that being hard was a way to protect myself rather than to accept how I really felt in relation to life. In the man’s world of building and hard work, there was always a consciousness of having to be hard and tough to prove yourself, as well as to avoid criticism and bullying. It was an imprisonment from my sensitivity.

Even after exposing this bulldozer mode and its devastating effect on me and everyone else, I would occasionally find myself heading into that behavior when things got tough. I could feel myself getting harder, meaner, colder and gradually numb myself in the process of getting things done. The funny thing is I could have made different choices, taken on less in a better, smarter way and therefore been ‘less under the pump’ so to speak. We always have a choice, even if we think at the time we don’t.

So, learning to take a moment, connecting to myself by feeling my fingertips against my skin, feeling by touch my Soul there and not just a mind driven by bulldozer energy, has helped me to come back to me. This has been supported by focusing on my breath at the tip of my nose, and saying the word ‘gentle’ as taught by Serge Benhayon of Universal Medicine in the Gentle Breath MeditationTM.

I realise our true strength is our tenderness and vulnerability as it allows for much depth of understanding and revelation from our Soul, rather than hardening and disconnecting from God and love to block out the sensitive being within.

Through my experiences with the presentations from Universal Medicine, I have learnt a great many amazing things, or should I say, been reminded of what I once knew to be true, and am now living these truths to the best of my ability, without perfection. This is thanks to ‘The Livingness’ and its inspiration in transforming the bulldozer energy into that of a butterfly. By the simple act of aligning to a consciousness, a butterfly-like transformation can take place through recognising and nominating when I go into hardness as well as following through with the commitment to observe, feel and be in purpose whilst moving in and with a sense of spaciousness and not time.

I know I have a choice of which energy I work in and which can support a more loving, all-encompassing way. Now in my early 50’s, my work productivity has increased, and I don’t feel the need to get wasted after a big day at work. The bulldozer mode with all its drive is a thing of the past, where I always seemed to be in a battle with time as the enemy.

Working in the butterfly energy now is being in flow and sensitivity in the physicality. I choose to work in the grace of space rather than pushing through. This supports my relationship with my fellow workers as there is no longer any need to compete with each other under pressure, but instead all work co-operatively towards the conclusion of the job at hand. The pictures, ideals and beliefs of how to be a man, tough and hard, and the days of trying to prove myself or get recognition for my physical output are long gone as I have exposed and renounced the push, drive and hardness, realising the absurdity and falseness of this energy.

My body is the marker of truth and I let it be my compass. Learning to move in the flow of space and not time has allowed me to work with ease and be more productive. I will no longer work at the expense of my body.

The saying ‘wisdom comes with age’ holds much truth, but if we can live in a way where we are not at war with ourselves and our bodies and move in harmony, grace and settlement, this leads to more loving and healthier lives. After deepening in understanding of the root of what was getting in the way and re-imprinting how I worked, the relationship between myself and my father has also blossomed over time as I have taken responsibility for myself and come back to my true essence.

Further reading:
Men — Are we set up to fail?
What does it mean to be a man?
Speaking up