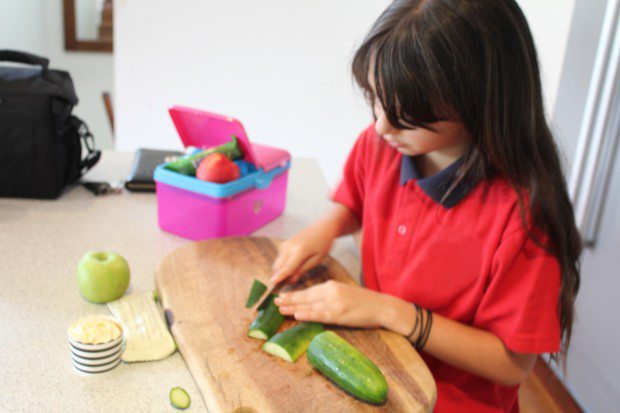 I am the father of three children aged 10, 6 and 4 and of late I have been learning a lot about children, responsibility and being a parent. For instance, I had been making the children their lunches and breakfast every morning for a while, but now this has changed.

This morning the youngest child, who is 4, told me she would like to make the lunches for everyone today. At first I was a little hesitant with thoughts like, “What about the mess?”, “You can’t reach everything”, “I’d rather just do it myself”, all coming to mind. I let those thoughts go and let myself feel what she was saying / expressing, and I could see she wanted to actually do it.

She started making the lunches and my little boy, who is 6, got up and said he would like to make his own. Again a voice was there: “They will fight and argue”, “A bigger mess to clean up”, “I’d rather do it myself”, etc.

I stopped and again let myself feel what the children were saying / expressing; I said “Yes” and let it go. I watched, and enjoyed the two of them working in the kitchen together. They packed the lunches very similarly to how I do it – apples, cold bricks, sandwiches and snacks. They packed their elder sister’s lunch with all the things she liked. Their lunches were similar but they tailored each of them to what they knew they liked. The 6 year old made the sandwiches and handed them to the 4 year old to pack into the lunch boxes. They worked together and not against each other – it was really enjoyable to watch.

As I looked and reflected, I realised that in the past I had told them about responsibility and forced the children to do things under the heading of ‘responsibility’.

But now I can see that for me parenting is not pushing or telling the children what to do in the hope some of it will be listened to. Parenting for me is just what I have described – my dedication to doing something until it changes.

Making the children lunches wasn’t to show I was a great parent or to show them anything. I was there, committed to doing their lunches for as long as needed. But I realised this morning that this had changed and now I needed to ‘get myself out of the way’ because the children were ready to do it themselves. I was still there for support, and I was no less because I wasn’t actually making the lunches.

I think there is a bigger picture here for me in my life that goes beyond parenting, children and responsibility. It’s not about telling children / people what to do or showing them ‘how’ in any way that ‘gets’ them to see.

It’s about my committing to whatever is there in front of me, and the willingness to do ‘that’ until there is a change – a true change that comes not from me, but from the children.

Then it’s about being open to ‘see’ the change and not being identified with what I am doing; not trying to ‘own’ what I am doing or have done, but to be willing to move to wherever I am needed next.

I have learned a lot from my ‘experiment’ with my children and responsibility. These ‘changes’ for me as a man have given me more freedom and are allowing me to say / express in a way that is more true to the man I actually am, naturally.