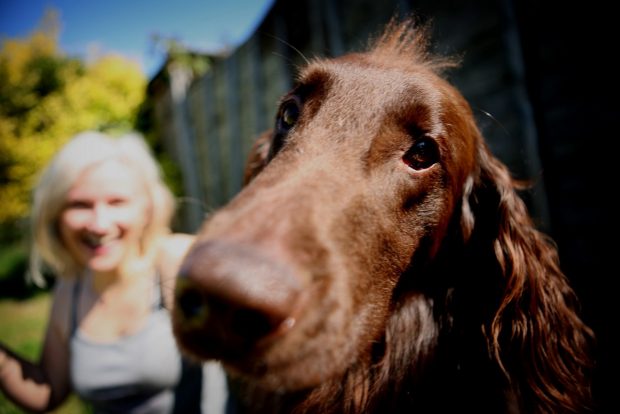 For most of my life I have been an emotional wreck, tossed around on a roller-coaster of highs and lows – one moment in the height of ecstasy, the next deep in the dark dungeon of despair – and it was within one of these lows that I found myself in April 2014. Benson, my ex’s dog whom I saw daily, often staying with me, suddenly collapsed and died.

The Passing of Benson and Realising the Mortality of Henry

I sobbed all the way home from the vets and the next week I had to take days off work; I couldn’t hold back my tears. I started getting angry with myself. I had throbbing headaches, my sinuses were screaming at me and my contact lenses were so cloudy with tears I couldn’t see properly.

I looked at my dog Henry and the realisation dawned that I could not possibly continue like this. If I were THIS badly affected over Benson’s death, how on earth would I cope with Henry’s?

At this point I turned to Universal Medicine practitioners for support and guidance because I was frightened by my coping mechanisms. I realised that these had been left unchecked and had become enormously destructive.

I had read the majority of books by Serge Benhayon and welcomed his frankness about life: there is a hard-hitting truth in all that he writes, and it really does make sense! It was refreshing to read something that was not pandering to my emotional state of mind – instead I was receiving the reality of truth – and it felt right.

Henry was my loyal and willing companion, the only being at the time whom I felt to have shown me unconditional love. It’s true to say that in him I had invested my love, my hopes and dreams, and so later that April I felt my future shattered when Henry’s mortality was suddenly realised!

We went to the vet because of a limp, the vet surmising that Henry had cancer in his shoulder that was impeding his movement: I was offered the choice of amputation or euthanasia. Stricken with fear I immediately reacted with amputation – I could not lose him!

And so we were dispatched to a larger practice with an MRI scanner for an accurate diagnosis by an orthopedic surgeon the following morning. She commented later that Henry’s eyes never left me, admiring the bond between us. I had never noticed, just taken us for granted!

That evening Henry’s own vet gently advised that given Henry’s age, his previous surgery and general arthritic condition, Henry’s movement on three legs would be very restricted. There was no doubt that he would survive the operation; in all other manners Henry was incredibly fit and healthy, but now we were looking at life quality.

The flat-coated retriever is known for its exuberance for life, its mischief, and for its love of everyone. Indeed, sharing your life with one is generally accepted as a 24/7 intense relationship!

Assistance is always forthcoming whether searching through cupboards, tying shoelaces or gardening. Gone would be Henry’s reversing skills as he cleverly extricated himself from tight situations; launching onto the sofa, sending cushions flying, charging up and down the stairs, leaping onto my bed and making a nest in my duvet and diving into his basket to retrieve one of his teddy bears.

Letting Go of Attachment and Need

That night I sobbed, and between sobs I realised that I was in a victim vortex that was spinning out of control. I desperately tried to regain some level of composure, to breathe gently, but initially my emotions fought back. As my body began to relax as I surrendered to its shudders I heard the words, palliative care, palliative care. I never listened; they were meaningless words, and cold comfort back then.

Now I understand and I appreciate and recognise the solace that was being offered to me that long and difficult night as the orthopaedic surgeon’s words of palliative care and a regime of pain therapy rang little bells of celebration in my head when I returned to discuss Henry’s diagnosis.

As I settled into a life of administering Henry’s drug therapy, I saw and continued to see and work with esoteric practitioners about my own state of being. In the beginning it was a wrench leaving him for a day as I travelled down to Oxford to see my practitioner, because I wanted to share every day with him. Every moment with Henry was so precious to me at the time, like a clinging child not wanting to leave its mother.

Through the sessions with my practitioner I realised that there was no me in our relationship; that I had delegated my life to Henry and so over time and by my own observations I began to understand my need to have Henry bolstering my life because of my own emptiness.

I had invested so much in this that I was emotionally attached, dependent on Henry utterly. And so, with my esoteric practitioner’s support I was able to work on letting go of this attachment, this need, and to focus on re-building me.

I realised that my own emptiness came from depending on another to provide me with the love I was otherwise not giving to myself. With this, I began to notice that the more loving choices I made for myself and the more I focussed on my relationship with myself, the more Henry relaxed into his relationship with me and our new life.

Learning to change my life in this way was not always easy, however the commitment was all mine – and learning that the way in which I did things would make a huge difference to the outcome was a massive responsibility.

There was no quick-fix and it was sometimes challenging, but I began seeing some rewards, often just tiny ones, and with the support of Serge Benhayon and my esoteric practitioner I was able to enjoy the remainder of my life together with Henry.

Learning to be Utterly Truthful with Myself

I started not looking around for Henry when I realised that he had been silent for what I felt was too long. I would trust that he was sleeping peacefully.

I began to realise that there would be a life post-Henry for me.

To begin with it was very hard as I realised how much I needed him to protect me from those things that I didn’t want to do. Staying in with Henry gave me excuses to not venture out as a single person into a seemingly brand new and rather frightening world!

My hardest challenge though, was to learn to be utterly truthful with myself.

In the past I would con myself that things weren’t that bad! Now, I had to be very alert and acknowledge when Henry showed any sign of pain rather than pretend he was okay, because I was still frightened of losing him.

On the surface it seemed so easy to just register that he was in pain and liaise with the vets, but fear would often strike me and my insides would start to writhe with my own anxiety.

And so it was my sense of duty that ruled, forcing me to make the call: but as our routine became easier and as I worked on continuing to make more loving choices for myself, I relaxed, feeling freer to make the call out of love, rather than fear of loss.

And for those remaining months we shared a deeper quality of life.

Henry climbed up the stairs and manoeuvred his forelegs onto my bed so that I could gather his back legs and lift him up and then he would rearrange his blanket where he slept. We had the same arrangement with the car and sofa, but he always managed to climb the stairs on his own.

I admired his resilience and determination, and watching Henry over those last few months I realised that the bond that the surgeon had originally witnessed was one borne of a true love and not the emotional one that had kept us enslaved.

Looking back, Henry had always trusted me. He seemed to know when I was making him feel more comfortable, or even making him better.

That dreadful day when I realised that Henry was in so much pain with his shoulder that he could not climb down the stairs, he waited until I returned with his harness.  He worked with me, so together we managed to climb down. From then on he would always wait for me to walk down with him, sometimes wanting me to slip my fingers through his collar first.

We both knew that we could do these things together, and without realising at the time that we now shared a love born of mutual trust. We had set each other free from our emotional entanglement.

Looking back over our last few months when I watched Henry sleeping, when I told him I loved him as I stroked his chest, or even when his excitement grew as his suppertime neared, I felt that lovely warm, comforting glow from my inner heart and not that rush of wringing emotion lower down.

We shared a truer connection; and while we had for many years trusted and loved each other, I feel that we had begun to give each other more space. Importantly, we allowed each other to be our own being, respecting our choices.

We had both matured in our love and found an innate security and comfort within. Our neediness had faded – we had realised that our lives were our own journeys and not intertwined.

We shared a relaxing few weeks together that December: I read, corresponded with Serge Benhayon and my friends or listened to my audios from the Esoteric Medicine series with Henry either lying on the sofa beside me, or sprawled out on his sheepskin rug in front of our open fire. I began to feel a slightly better level of being as the days passed, but then one day I realised that Henry wasn’t quite himself.

His painkillers had increased until his cheeky smile and general zest for life faded: his heart, the biggest most generous and courageous heart I have ever known, grew too tired of life.

A few days later Henry passed over on 6 January 2015, having developed what was suspected to have been another tumor.

A few nights before I lovingly said goodbye to my best friend, after we had enjoyed a wonderfully, peaceful day together during which I held my loving connection to my being and was relaxing in bed, I realised how peacefully Henry was lying across my body, totally relaxed and at one with me; sharing our joy, love, trust and truth. I felt that he too was connected to his own inner-self and I smiled, knowing that he was preparing his body for death; a body that had given its all, but which was now ready to surrender.

With the continued love and support from the many beauty-full people whom I have met over the last few years through Universal Medicine and the unbelievable joy at my first workshops when I rediscovered for the first time in a very long while the true beauty-full me, I know that deep within is all the love in the world – just waiting for me!

Further Reading:
True Relationships – Being Love First, not Demanding it from Others
Love and Relationship Audio
National dog day – August 26 2105