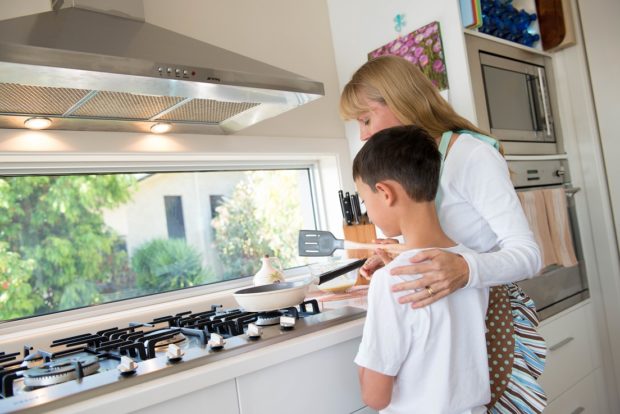 My Relationship with My Son

By Anonymous · On August 8, 2019 ·Photography by Clayton Lloyd

I remember the exact moment that it happened. My partner, our 15-year-old son and I were going down a very long escalator on the underground in Prague when my son put his arms around my shoulders from behind. A simple, and for many, everyday act that would not and did not stand out to anyone else on that escalator, but an act that every cell of my body registered and one that made me feel like singing from the rooftops.

Touch between my son and I was rare and I’d like to say that it was more on his side than mine, but that wouldn’t be true. Now I appreciate that what I am describing might sound all very normal, considering that my son is a teenager but our relationship had been troubling me for a while, particularly because I have come to understand that relationships are like mirrors and that when we look into them, the reflection that we are shown is actually of ourselves. Given this immutable fact, I had been pondering for a while what it was that I was being shown about myself, through the reflection of my relationship with my son.

It is not always easy to be honest; often the things that we are shown about ourselves aren’t pretty but what I have found is that if I resist the urge to go into self-critique and choose instead to understand that what is being presented is an opportunity for great change, then it makes the process much easier. In fact, I have now come to a place where I actively seek the reflection that relationships offer, as I deeply appreciate the opportunity that the power of reflection provides.

For the first five years of my son’s life I spent a lot of time with him, playing with him, taking him to the park, reading to him and being very conscious of the way that I parented him. I made a point of praising him a lot and often told him how special he was. I was naturally a very playful Mum and I worked hard to not show my frustration or anger. When I say anger, it was not a boiling over, ‘in your face’ kind of an anger, but more of a deeply buried one. I just about managed to keep a lid on my frustration and anger by dedicating myself to a strenuous exercise routine, peppered with a liberal sprinkling of all night partying. Had I chosen to acknowledge those deeply buried feelings, then this would have been the first vital steps needed in dealing with them but alas, I chose to bury them instead.

I had fairly set ideas about what I thought ‘being a good Mum’ was and I lived out those ideas pretty convincingly. I held the belief that I was a great Mum and my friends and family backed me up in that belief. At the time, I didn’t doubt that I was a deeply loving Mum and that my partner and I were bringing up our son in the best possible way.

However, what I have come to feel in recent years is that the pictures that we hold about certain things are so commanding that they superimpose themselves over the top of the underlying truth. My belief that I was a great Mum impacted on my ability to feel where I was really at. In hindsight, I can now see that there were many indicators that demonstrated very clearly exactly where I was at. One such indicator was that whenever our son was sick, it was my partner who would sit and hold him for hours on end, because the underlying tension that I lived with constantly made it nigh on impossible for me to sit and do what I perceived as ‘nothing’. I had a driving need to continually ‘get on and do something’ and it was this drive that kept me in perpetual motion.

The other major thing that I was unable to feel was my absolute exhaustion, an exhaustion that I hauled around with me from day to day and one that formed a rather shabby base for everything that I did. Knowing that children, like the rest of us, can feel everything that is going on in another person’s body as well as their own, I couldn’t help but ask myself “What had I been truly communicating for all of those years?” This question became key and was brought up one day by an amazing esoteric healing practitioner. She asked me to consider what was I truly communicating with my body when I stood outside my son’s door and, from my hard, contracted body, squeezed out the words “Come out of your room darling and spend some time with your Dad and I.” Great question and the answer revealed much. What I realised is that what I had been communicating with my body was worlds apart from what I had been communicating with my mouth. And what is crucial to understand is what we communicate with our bodies is what is felt by another.

This revelation prompted me to get brutally honest with myself about what I was communicating, not only with my son but with everybody else. What I realised is that what I expressed with my mouth was often very different to what I expressed with my body. This revelation, albeit simple, has been a life changing one for me, as it has enabled me to begin to bring real change to not only my relationship with my son but to all of my relationships, simply by getting honest about what it is that I am feeling in my body.

When I am aware that my body feels like it’s wanting to pull away from my partner or my son in an attempt to ‘get on with something else,’ I try – to the best of my ability – to physically relax it, and although at times this feels quite mechanical, what I’m finding is that it’s leading to great change. Yesterday, whilst on my way to the shop, I bumped into my son coming back from school and he instinctively put his arms out for a hug and my response was to surrender my whole body into his arms.

Further Reading:
Learning to be in Relationship without Pictures
My Father and His Reflection
From being a good mother to true mothering