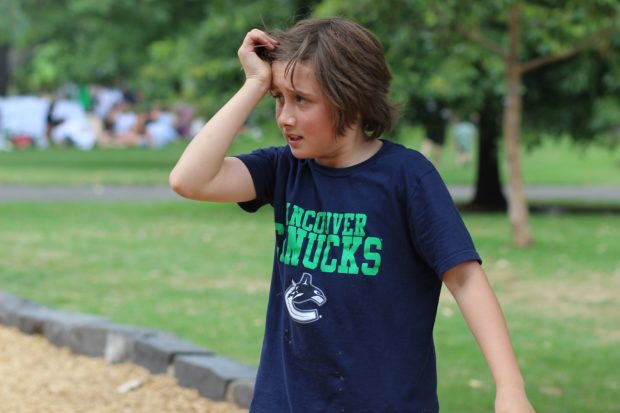 Recently my eight year old son has gone through some changes – one such change being that he no longer shies away from his vulnerability like he used to. This has taken some adjusting to on my part…

I first noticed the changes after he hurt himself at school one day and we needed to go to the hospital to have his injured knees looked at. Before bed he had a big cry about how one of his friends had laughed at him when he fell over and hurt himself and how later the nurse had been a bit rough with him when tending to his sore knees. He openly expressed his feelings and what had hurt during the day.

Then a couple of days later, he popped in to see me at work after school just to say ‘hi’ as I work next door to where we live. He was not his usual jovial self. He felt a bit flat and I thought something was wrong. I left work early thinking he needed me, needed something or that something needed to be fixed. When I got home I found he was quite content clearing out his drawers, having some quiet time in his room.

I looked at him and realised he was perfectly ok, that he was actually feeling incredibly gorgeous. He didn’t feel the need to please anyone and was quite happy being as he was. Combined with the other experience when he hurt his knees, I realised that he was choosing to stay in his vulnerability – he was ok with crying, feeling sad or simply whatever it was he was feeling.

I realised my response in these situations – where he was simply expressing how he felt and allowing himself to feel what was there – was to want to fix it; to bring him back to his ‘normal.’ But why was this not normal? Perhaps I’d been sending the message that he had to be a certain way, that anything but his ‘normality’ rocked my boat and I wanted to fix it.

Do we have an issue with allowing the expression of such fragility? Is it possible that when another allows themselves to be, feel and stay in their vulnerability, it is a reflection that causes us to feel uneasy, needing to change the other’s behaviour as soon as possible? We want to ‘fix them’ so that we can feel comfortable again.

In some instances, ‘fixing’ may not be the way, but rather mocking and ridicule. When they cry, boys are called a pansy or a ‘girl’ – as if there is something wrong or lesser about being female. As girls and women, expressing from our vulnerability just seems to make everyone uncomfortable. Male or female, fragility and vulnerability are seen as a weakness and is something to be avoided.

In my case, I was essentially telling my son it was not ok to be vulnerable. This was a big lesson for me – both in how I am with my own vulnerability and that of others.

Since this realisation, I’ve been a lot more aware of my own impositions upon another’s expression and whether it is triggering something in me. Do I express my vulnerability? And do I let others express theirs?

Perhaps there is much that can come when we allow others to be in their fragility, tenderness and vulnerability. We can take inspiration from it and accept the reflection and what it offers. The observing of someone’s vulnerability is a beautiful beholding love, where walls of protection come down and we are gifted the opportunity to truly see what has been hidden.