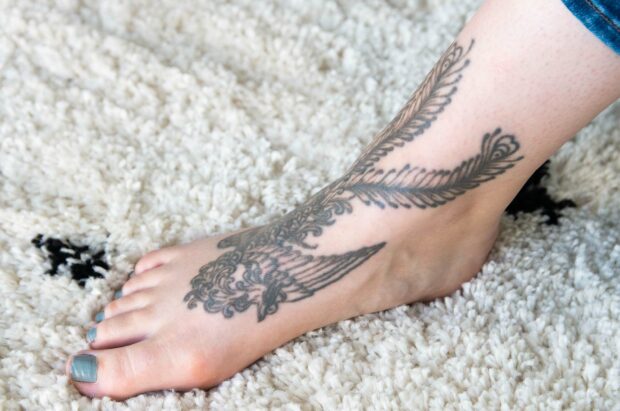 Social Issues, Tattoos & Removal 13 Comments on What Was it Really Like to Get Tattoos?

By Giselle Cavanagh · On October 28, 2021 ·Photography by Benkt van Haastrecht

But where did the impulse to get tattoos come from in the first place?

If you ask me now, after several years of reflection and a willingness to share from a deeper honesty, I would answer this question completely differently than if you had asked me when I was 18…

So, Giselle, where did the impulse to get tattoos come from?

18: “I want to get tattoos that symbolise something that really means something to me, like my star sign constellation, and my cat who I loved that has recently passed away, and a love heart because it’s cute.”

23: “I got tattoos as a way to punish all those who hadn’t believed in me as I grew up.”

The inner voice of 18-year-old me: “I can do what I want now; you can’t control me because I’m 18 and this entitles me to some sort of power in this world under current law.”

I would often get asked what would happen or what would I do if I stopped liking the tattoos, usually from adults older than me… and I would flippantly say “I can just laser them off.”

I can tell you now, sitting here, after my fourth or fifth laser tattoo removal session (with another eight to ten sessions to go spread across four to five more years) that it is not that simple. The cost, pain and healing time are a few of the things that need considering… but most of all, how it feels to go through this process.

I can now say a lot has been uncovered the more layers of these tattoos I have removed. And I don’t just mean physically, but what is actually embedded in the tattoos – my intention to get the tattoo in the first place, the ink, and the artwork of the tattoo artist.

Their artwork. On my body. Not my own artwork, but another’s – (their intention).

From everything I have felt from having laser tattoo removal, I can now say I felt a lot more than just the needle pricking my skin when my tattoos were implanted into my body. And I use the word implanted because that’s how it felt – when that needle injected into my skin the first drop of ink, I could feel I had allowed much more than just ink into my body. I had allowed someone else’s artwork to lace my body.

I distinctly remember feeling the sadness of the man who drew my first three tattoos and later my fourth too.

And I distinctly remember feeling preyed upon by the man who did my fifth and sixth tattoos.

I also distinctly remember feeling my own sadness in getting them; as if I had deeply hurt myself by having them tattooed into me.

And lastly, I distinctly remember halfway through my sixth and final tattoo that I didn’t want it, but I pushed through and let the ‘artist’ complete his artwork on my body.

The last two tattoos bled for a while after I had them – for the next several months in fact. Then at seemingly random times they would ache, become raised, get rashes and be sore.

My body knew they didn’t belong.

From the moment I got tattoos my body reacted to them; and I say ‘my body’ because I wasn’t at that time having a verbalised emotional reaction to the tattoos but a very obvious physical reaction. This physical reaction was not just around the time of getting the tattoos but extended for quite some time. The reaction included the skin where the actual tattoo was and the skin around those areas, which felt bruised, inflamed, tender and sore. I would also get rash breakouts around each of the tattoos, namely the ones over my ribs, and the rashes would sting and feel painful when clothes pressed against them.

And you may be thinking – were the tattoos infected?? I can assure you, they were not. They were fully healed – no pus and no cracked skin.

The more I tuned into these very obvious physical reactions my body was having to the artwork that had been implanted into my body, the more I myself felt the tattoos did not belong either.

It was not long after getting my last two tattoos that I began to have regular Esoteric Healing sessions and these sessions allowed me to connect to a much deeper sense of myself, to the truth of me. And from this point, I was able to feel that the tattoos I had were not impulsed from my truth. It made sense. Of course, my body was hurting from the tattoos because the essence of me was very clearly claiming that the tattoos were not a part of it.

Hence began the laser tattoo removal. I saved for months to afford one session at a time (several hundred dollars or more depending on the size and colours of the tattoo). I would have to spend more for local anaesthetic because I could not handle the pain of the laser without it – over 200 degrees (higher every visit). I could smell my skin burning as they worked away at breaking down the artwork that did not belong in my body.

After each session I would really have to give myself the space to heal. Given where my tattoos were (over my lower abdomen and ribs), after the treatment I found it difficult to move my arms a lot, to reach or to twist. And each session I had also brought up a lot for me to feel in my body alongside the physical aspect of the treatment (needle bruises, inflammation, blisters, nausea, dizziness, ill-tummy, heat, itchiness and soreness).

The laser tattoo removal treatments and my commitment to clearing out of my body what did not belong to the truth of me, gave me an opportunity to reconnect to those moments when I was actually getting the tattoos as well as the moments prior to getting the tattoos… I was able to confirm things I had felt in those moments that I was previously uncertain about, yet now were re-presenting themselves for me to feel and consider: buried in my body and now coming out to be let go of.

What I was astonished by, in a sense, was that some of what I was feeling wasn’t even mine!

Requesting someone to place an artwork on my body was simply my intention when getting the tattoo. But I wasn’t the artist, so their intention was placed into my body as well.

This is no judgement towards those people as they have their own history to contend with, but it was simply something I was affected by as I had allowed them to make their mark on my body. No matter the fact that I chose the picture (tattoo) they were drawing. Whatever state they were in, whatever they were living, was left on my body as they injected the tattoo needle into my skin.

So, what was it really like to get tattoos?

Once a Melbourne gal, and now living in the warmth of Brisbane with my beautiful husband in a spacious house where we work - a lot! I adore all the people in my life and the many I get to meet through the various avenues of work I have.