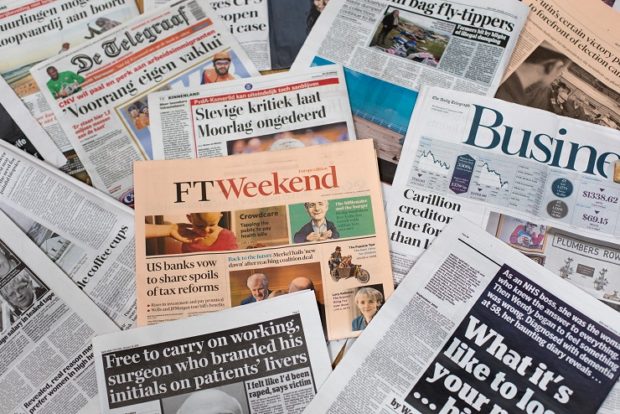 While watching some footage on Hurricane Irma wreaking its havoc through the Caribbean and the USA in September 2017, the television broadcasters were lamenting that the radio broadcasters were ‘losing’ and ‘losing out’ because people were tuning into their TVs for the coverage the visuals of TV offer, rather than listening to radios. Immediately, I furrowed my brow.

Since when did news become about winning and losing? Isn’t news for all? Isn’t it actually a service for everybody, equally?

Why have we made providing news a competition?

What is newsworthy is that our worldwide media has become about advertising deals and making money based on readership/viewership levels – the going rate for a commercial during the 2017 USA Superbowl was US $5.02 million (1). It’s based on clicks and shares on social media, achieved all the more depending on the degree of drama, sensationalism, scandal, ability to stay front page for longer etc. The more terrorising, horror-full, exposing, painful, weird, attention seeking, alarming or impactful the reporters/journalists can make a story, the better.

Many media outlets stand behind the motto: ‘People deserve to know.’ But so often this gives rise to the ‘dog eat dog,’ or ‘cat and mouse’ chase style of journalism we have that seems to far outweigh the simple bringing of news and information for the awareness of humanity. People do deserve to know, but we need to take it further and say instead, ‘People deserve to have the truth.’

And we have awards to “honour journalists who risk everything to bring us the news” and for those who “persevere under the most difficult circumstances” (2). To me this begs the question: why have we made it good and desirable and now even necessary to ‘risk everything’ for a story? Why are we worth so little as human beings that we have made it acceptable to risk our health or life for recognition?

The news isn’t all bad though. Some of these awards can be useful and relative to the industry of reporting, (good/truthful) news opening our eyes to things that otherwise might stay hidden. News has the ability to bring people together through the shared knowledge of aspects of life. If only this was all news was used for.

So what if we were to (only ever) honour and celebrate journalists/media outlets through an appreciation of their respectfulness, decency and dedication in providing true stories for the public?

Let us not base our recognition on rewarding journalists’ behaviours, at times outrageous. So often these behaviours aren’t all that lovely. Let’s now look at an example of the difference between the reporting of modern day news versus how it was done some 70 years ago.

In the Samford Museum (Queensland, AUS) there is a wall of old newspaper clippings from the 1947 train crash when a train derailed between the Ferny Grove and Camp Mountain stations.

The newspapers from the day cover the accident quite graphically and in great detail. You get to understand that this was definitely a catastrophic event that killed 16 people, injuring 38 more. But you get this from the facts, not from the author’s opinion or use of emotive language. The story was covered thoroughly to provide a true account of what happened, with no words like ‘inexcusable,’ ‘shocking’ or ‘appalling’ needed; no need for a call to action from readers. Simply, the paper told the story as it happened. Punishments or damning those responsible wasn’t called for, as that was not the responsibility of news in those days.

If we were to read a report of the exact same incident in a newspaper today, we would get the facts, yes, but they would be some 20% or so of the story, – the rest given over to hypothesizing, calling for castigations of those responsible or criticising/critiquing the system that allowed the accident to occur.

Journalism these days strives to inflame the reader, to garner a response, so much so that it appears we have become almost numb to horror, needing the most reeling story to elicit a response. We have become overstimulated through emotion.

And so about this numbness to horror. Because we have become desensitised, are we choosing to not feel the pain of what we are exposed to until it becomes so, so bad? Are We, the readers or consumers of media, actually the ones asking for more and more sensationalism for our news?

Is it because We demand this style of journalism first that we are then supplied or fed the lies and half-truths we call news? Perhaps it is Us that is both the cause and the problem.

If this is indeed the case, and I do suggest that it is, then we will continue to go around and around, most likely sinking lower and lower into the stakes of indecency as We demand and are supplied what we call for. Ask, and you shall receive. When will we have had enough?

Enter Universal Medicine in the News: The True History. This is a website written by people who have first-hand experience of press abuse and has been written “to restore journalism to the decency of its purpose” (3).

Any person or any business who has ever been written about where the journalist has omitted the finer details, embellished the story to attract a wider audience (“don’t let the truth get in the way of a good story,” they say), or plainly made up ‘facts’ because the true story didn’t seem enticing enough, has been abused by the press. I dare say there would be billions out there that this has happened to.

Over time we have learned to not believe everything we read in the papers. But why should this be so? I want to be able to see truth in everything I read. Why should I have to discern what’s true or not, reading with skepticism or doubt, knowing facts may not have been verified, skimming through the emotive words and phrases to get to the real truth?

The call to action from this article is for people to reach that point too of being sick and tired of everything the majority of the media industry stands for today and ask for it to change. Because we have the situation now that money talks – readership levels and consequent advertising dollars mean the difference between the survival of a publication or not – we-the-consumers are in the perfect position to demand change.

If We choose to remain deliberately ignorant to the harm being caused through the media industry, then We remain part of the cause.

If We ALL choose to not face the fact that We are asking for what the media presents, then We ALL remain part of the cause.

If We ALL are not part of the answer – the change we want to see – then We ALL remain part of the cause. What we are silent about is what we accept.